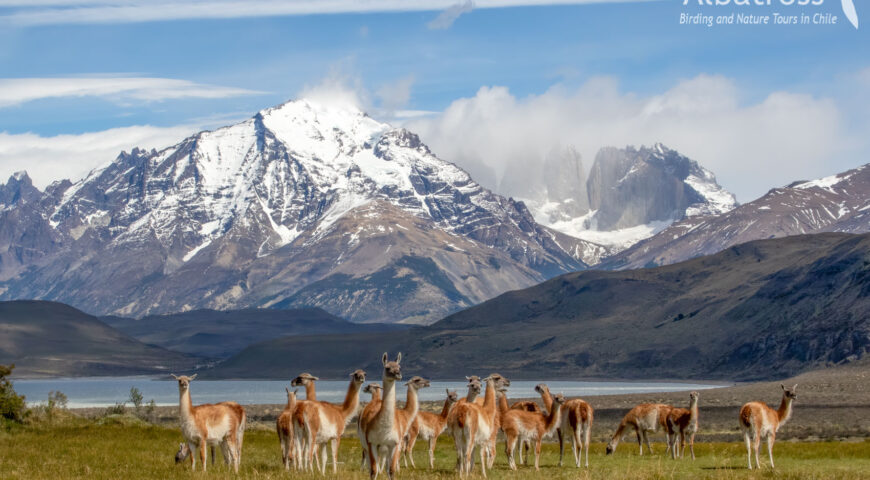 A destination guide to birding in Chilean Patagonia

This is the first installment in our ‘Destination Guide’ series to the main birding areas of Chile. These articles are intended to give you an overview of the most important sites and hotspots in Chile, with information on the main habitats represented in each area and the species of interest you can find there. The intent is for these articles to complement the briefer descriptions in our tour pages and give you a better feel for what you might expect in a given broader area.

The first installment of the series focuses on the main birding areas/habitats in Chilean Patagonia. Birding these areas will produce most of the austral specialty species.

The Torres del Paine National Park in Chile’s southern Patagonia, has probably the country’s most famous postcard scenery. With its dramatic granite spires and glacier-topped mountains jutting out of the rolling hills of the steppe, and turquoise lakes adorning the foreground, this is a destination dream by backpackers and photographers the world over. But, probably less appreciated, the park and its surroundings are also host to some hard-to-find Patagonian specialty birds  and other wildlife.

Location: The park is located roughly one and a half hours north of Puerto Natales, the nearest town; or a little over 4 hours from Punta Arenas, the main city of Chile Patagonia, on the Magellan Strait. The park itself has numerous accommodation options (however, they are often booked years in advance) , but the most common base for day visits is Puerto Natales.

Shrubby Steppe: Most of the landscape is comprised of rolling hills covered in steppe and low scrub. Austral Canasteros, Sharp-billed Canstero, and  Band-tailed Earthcreepers (a Patagonian endemic) perch on the scrub, while Andean Condors and White-throated Caracaras pass by overhead. At higher elevations you can find Yellow-bridled Finch feeding on the seed in the steppe.

Reed-fringed Lagoons: In and around the park there are numerous small lagoons with reedbeds. These type of lagoons are  uncommon elsewhere, and are the main spot for the scarce Austral Rail.

Nothofagus forest: Areas of the park have Nothofagus forest (predominantly pumilio), with the forest edge dominated by Embotrium coccineum. Typical forest species in the area are Thorn-tailed Rayadito, White-throated Treerunner, White-crested Elaenia, Striped Woodpecker, Chilean Flicker, and with some luck the majestic Magellanic Woodpecker. Austral Pygmy-Owls can often be coaxed out of the forest edge.

Other wildlife: The park and the surrounding landscape are also great areas for many mammal species. On the rolling hills you often find large groups of Guanaco grazing, while close to scrubby forest edges you may find the endangered Southern Andean Deer or Huemul. Torres del Paine has recently become arguably the best place in the world to spot Pumas. Other mammals include, Southern Grey and Culpeo Foxes, Patagonian Haired Armadillo, and Patagonian (Humboldt’s) Hog-nosed Skunk.

Location: In Chilean Patagonia, the extensive steppe is the predominant habitat throughout its eastern portion; whereas mostly inaccessible forested fjords dominate the west. The steppe creates vast, mostly flat, landscapes of short grasses, with some rolling hills. On Tierra del Fuego, the majority of the Chilean western half of the island is comprised of steppe.

Species of Interest: Family groups of the skittish Lesser (Darwin’s) Rhea roam the rolling hills and are encountered frequently. The Patagonian Tinamou forms small groups foraging between the tussocks, remaining very inconspicuous. Its calls sometimes may reveal its location. However, the howling Patagonian winds can be a bit of a nuisance in this respect. Birding the steppe usually entails driving long distances on backroads, making stops for any bird flushing the side of the road. On these roads you can often flush Short-billed and Common (Patagonian subspecies) Miner and spot Chocolate-vented Tyrants perched on a fencepost or low scrub. Inland and at slightly higher elevation you can encounter White-bridled Finch, Tawny-throated and Rufous-chested Dotterel. Patagonian Yellow-Finch are generally easier to see closer to human habitations.

Other wildlife: Some mammals of interest you may see in the steppe include, Guanaco, Southern Grey and Culpeo Foxes, Patagonian Haired Armadillo, and Patagonian (Humboldt’s) Hog-nosed Skunk.

3.- Coastal areas and Strait of Magellan

Location: The highway leading south out of Punta Arenas follows the coastline for some 70 kms, where you reach the end of the road and the southern-most pavement on the continent. The shingle beaches visible along most of the road are prime areas for picking up some of the marine specialties.

Habitats: The coastal areas near Punta Arenas are generally shingle beaches with small estuaries every so often. Old pier structures on the shorefront are also good for Cormorants and Gulls. The ferry crossings to Tierra del Fuego can also be good for some pelagic species that enter the Strait.

Species of Interest: South of the city Ruddy-headed Goose breed at a couple different spots of pasture close to the coast, and Flightless and Flying Steamer-Duck can be spotted in the waves just offshore. Kelp Geese and Dolphin Gull are seen in pairs or small groups on the waterfront.  Magellan Cormorant often perch on lonely rocks just offshore or at ferry crossings. Magellanic Diving-Petrel, Black-browed Albatross, Antarctic Giant-Petrel and Chilean Skua or common on ferry crossings.While Southern Fulmars can be spotted between Autumn and Spring.

Other Wildlife: Along coastal areas you may encounter a few mammals species, like South American Sealion, , Souther Grey Fox, Guanaco, and Magellanic Tuco tuco. While on a ferry crossingyou may spot some cetaceans, likePeale’s and Commerson’s dolphins, and Sei whale.

In 2010 a small group of King Penguins were first spotted on the shores of Bahía Inútil (Useless Bay – owing its name to the shallow waters), on Tierra del Fuego. Since then, a group exceeding 100 penguins have established breeding at this small estuary and can be seen there throughout the year.

Location: Access to the small private park requires a ferry crossing to Tierra del Fuego and a 2-3 hrs drive (depending on how often you stop for photos or birds in between) southeast of Porvenir.

Other species of interest: On route to the Penguins the steppe is home to some specialty species, like: Rufous-bellied Dotterel, Two-banded Plover, Short-billed Miner and Chocolate-vented Tyrant. Having crossed onto Tierra del Fuego, a day to the see the Penguins can also be combined with searching for the Magellanic Plover (more about that below).

The Magellanic Plover is the sole representative of its family, Pluvianellidae, quite a rare distinction evolutionary speaking. It’s a rather rare inhabitant of the steppe and remain poorly known. A must see on a trip to Patagonia.

Location and Access: There are a couple somewhat reliable areas to find this bird. One on the continent and the other on Tierra del Fuego. It’s generally found on the boulder and sand shores of medium sized lakes.

Other species of interest: On the lakes where the Plover is found you can also see Chilean Flamingo, Baird’s andWhite-rumped Sandpipers, Austral Negrito, and Chilean Skua.